Senescence the gift that keeps on giving: dasatanib and quercetin to the rescue?

März 14, 2015
I wanted to highlight the recent paper by the Kirkland group (1), despite the press it has already gotten, since it is indeed deserving of praise. Starting last summer I developed an interest in the field of senescence since senescence was a focus of the "Neurobiology and Neuroendocrinology of Aging conference" in Bregenz, which I attended, and some of my colleagues work on it. The field does not cease to amaze us with promising data.

Why does senescence matter? Briefly, senescent cells accumulate in aging non-human primates (2), impede tissue function (1), and are reduced in long-lived mutant mice (3). Further, progeroid phenotypes can be alleviated by removing senescent cells (4), although, I do not quite trust models of accelerated aging and prefer other types of evidence (1, 2, 3). 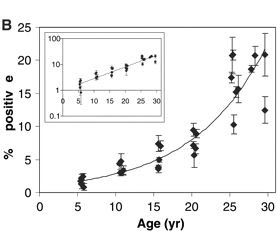 Accumulation of senescent cells in baboon skin (2)
The majority of 53BP1 foci (62 ± 7.7%) colocalized with telomeric DNA, thus classifying them as TIFs … The frequency of TIF-positive nuclei increased exponentially with age, reaching a value of 15 to 20% in very old animals

Right now we are basically waiting for the (definitely already ongoing) lifespan studies, based on genetic (4) or pharmacologic (1) senescent cell ablation, to be published in Nature/Science so that we can start developing human therapies. And I do expect them to be successful. In the meantime Kirkland & co will continue publishing amuse bouches studies.
Given the paucity of data available, even though the evidence appears strong, I wonder if human studies will commence before the lifespan studies in rodents finish? All bets are off: in principle the data is promising enough to pursue pilot trials, similarly to parabiosis, but ethics boards tend to be painfully slow and conservative.


I foresee, however, plenty of self-experimentation. There is definitely a market for life extension drugs! As far as self-experimentation is concerned, there even exists a community of people dedicated to self-experimentation with caloric restriction. Even if Kirkland cautions against experimenting with his newly developed treatment and certainly not without reason: '“There’s a whole bunch off things we have to do before people should even begin to consider using these things...”' Personally, I fully support evidence-based self-experimentation. But has the evidence matured enough to try his drugs? Hundreds or at least dozens of studies - lifespan studies, papers with hard outcomes - supported calorie-restriction (CR) when the CR society was established around 1994, whereas we still lack safety data on senescent cell ablation. If I were young, I'd wait before messing with senescence.

Getting back to the paper. My first impression of the new work from the Kirkland group is quite positive (Zhu et al. 2015). Here, a brief summary:

Even though senescent cell abundance in aging or diseased tissues is low, achieving a maximum of 15 percent of nucleated cells in very old primates, senescent cells can secrete pro-inflammatory cytokines, chemokines, and extracellular matrix proteases, which together constitute the senescence-associated secretory phenotype or SASP (Herbig et al. 2006; Coppé et al. 2008; Kuilman et al. 2008)...Effects of senolytic drugs on healthspan remain to be tested in chronologically agedmice, as do effects on lifespan. Senolytic regimens need to be tested in non-human primates...

dasatanib and quercetin [were tested in this study, D. is a tyrosine kinase inhibitor and an anti-cancer drug. It is active against Src and Bcr-Abl among other targets, Quercetin is a polyphenol commonly found in the diet.]

A single dose of D+Q (D: 5 mg/kg body weight and Q: 50 mg/kg by oral gavage here and in the following studies), a drug ratio that was most effective in senescent MEFs (data not shown), reduced SA-βgal+ cells (Fig. 3C) and p16 mRNA (Fig. 3D) in fat from old mice within 5 days. D+Q also reduced p16-positive cells in liver from old mice (Fig. 3E-F).

We tested if treating 24 month-old mice with D+Q would improve cardiac ejection fraction (the fraction of heart volume pumped during each heart contraction) and vascular responses to acetylcholine, nitroprusside, or U46619... [and indeed cardivascular function improved]

There are a number of theoretical side effects of eliminating senescent cells, including impaired wound healing or fibrosis during liver regeneration (Krizhanovsky et al. 2008; Demaria et al. 2014)...