September 28, 2016
In "The Better Angels of Our Nature: Why Violence Has Declined" Steven Pinker chronicles an unprecedented decline in violence and war over the last decades and centuries (c.f. [4]). After having read this book one has to wonder if the same trajectory applies to public health goals? Although, the answer is obvious to me I don't think it is evident from media reporting or even common knowledge that the world today is better than ever in almost all regards.

One key question is not just whether there is progress at all, but also the rate of change. Is progress accelerating leading to a singularity? Is progress constant, e.g. a fixed decrease in deaths per year or a fixed fraction? If the latter is true the total amount of suffering may be increasing while the incidence of suffering decreases, not exacly the best outcome.
Or is progress even slowing down because the last bit is the hardest, the remaining challenges being exponentially more complex - as has been suggested for biomedical research?

Can we expect a world without bloody internecine struggle in 2100? Will we live long enough to see a world without poverty, gender inequality and HIV? Will we eradicate cancer and solve aging one day in the far future?  How ridiculous are these questions and aspirations?

If we want to look at high level progress towards a better, utopian world, it seems prudent and most convenient to look at those who need the most help: poor, developing nations. The United Nation's "Millennium Development Goals Report" (1) provides a handy source documenting progress across the board with notable exceptions. In this post, I will discuss what we have achieved so far with some added commentary on biomedicine and Pinker's book and at some later point I plan to write a post focusing on the situation in developed nations.

Goal 1: Eradicate Extreme Hunger and Poverty
Economic growth has led to a decline in poverty and starvation both in absolute numbers and relative to the population. 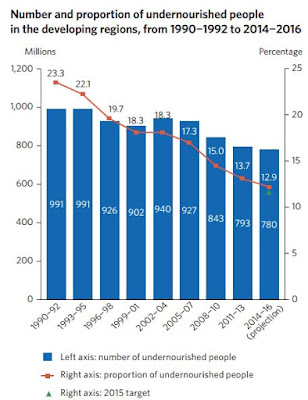 Recent violent conflicts and wars in Afghanistan, Iraq and Syria, however, threaten to undermine further progress. In 2014 there were approx. 60 million displaced persons. This is not necessarily inconsistent with Pinker's hypothesis of a "New Peace", because current conflicts tend to have lower body counts than many wars of past decades. Since the book was published in 2011 and most of the data on violent conflict only included datapoints up to the year 2000, an evaluation of the 2000-2020 period will be very informative. In any case, it would make sense that war and prosperity would move in the same direction and are inter-dependent.

Goal 2: Achieve Universal Primary Education
More children than ever are going to school, although, unfortunately progress has slowed. 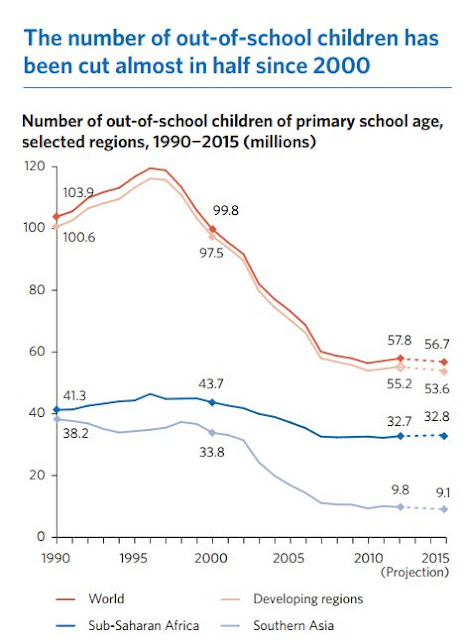 Goal 3: Promote Gender Equality and Empower Women
"The education of women and girls has a positive multiplier effect on progress across all development areas. Driven by national and international efforts and the MDG campaign, many more girls are now in school compared with 15 years ago."

On a sort of related note, my personal experience in Austria has been that affirmative action (positive discrimination) can realistically help women to reach parity in academia. Does anyone else help to organize lectures, curriculums or conferences? Did you ever notice that your first pick tends to be male but when you actively seek to find women you get equally competent speakers? On the other hand, we have to be careful not to discriminate against men at the wrong career stage. Although, women are very successful at getting into college or university, they are highly under-represented in well-paid positions, hence it's so hard to find female experts (i.e. professors/researchers) for our talks. 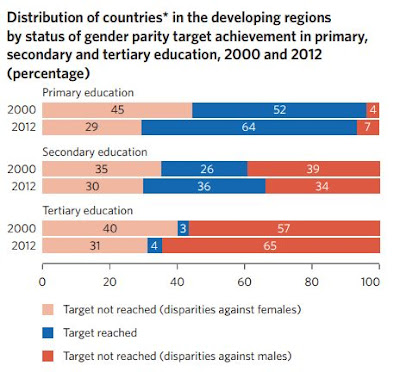 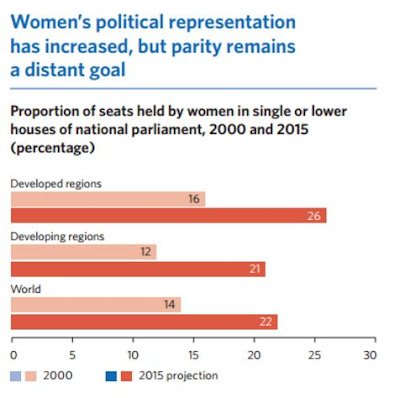 Coming back to Steven Pinker, better political representation of women will most likely reduce worldwide rates of conflict. The largest observed gender dimorphism in humans might well be the propensity of males towards violence. Part of it is certainly intrinsic and part of it socially constructed.

Goal 4: Reduce Child Mortality
Progress has been made, although, slightly below the self-imposed target. Another problem is that
"continued outbreaks [of measles] due to weak routine immunization systems and delayed implementation of accelerated disease control—have stalled momentum towards achievement of regional and global targets for measles control and elimination."
The problems with vaccine coverage aren't confined to Sub-Saharan Africa. We have our own issues. The anti-vaccination movement is quite strong in Europe, unfortunately, and we continue to have measles outbreaks due to a dangerous back to the roots mentality with people seeking more "natural" alternatives to science. 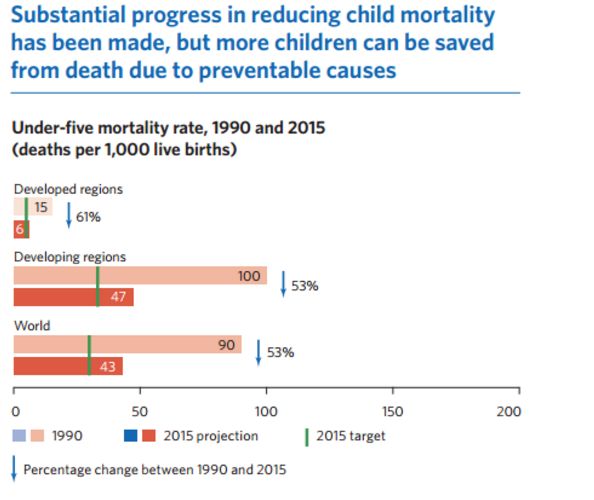 Goal 5: Improve Maternal Health
Maternal mortality has been cut almost in half since 1990. While "significant progress has been made ... it fell far short of the global goal and targets."

We are getting better at controlling HIV and malaria. Tuberculosis incidence and mortality are also declining. 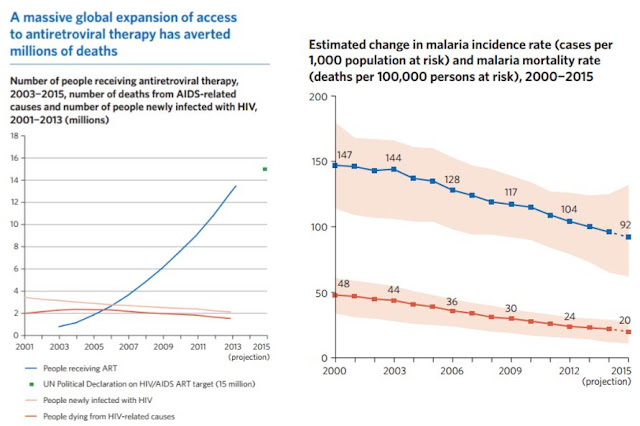 What we now need is a cure for HIV.

In order to rid the body of HIV, current efforts focus on reactivation of latent virus to allow killing of reservoir cells like CD4+ cells and macrophages, also astrocytes and thymocytes (2, 3). So far partial reactivation has been achieved by stimulating NFKB or histone deacetylation, but clinical results in pilot studies were unimpressive.

So we are getting closer to an HIV cure but on top of that we need a vaccine for HIV and a vaccine against malaria. Actually, an improved vaccine. You may not know - and I certainly didn't until I researched it for this post - but we actually have vaccines for both diseases.


The RTS,S vaccine was tested in Phase III trials in 11 different African countries. These trials have had some successes. The earliest results, released in October 2011, showed that in children aged 5-17 months, vaccination with RTS,S reduced the risk of clinical malaria and severe malaria by 56% and 47%, respectively.[17]  However, .... Final results from the trial, which followed young children for about three years, showed reduction in clinical malaria cases by 26% for the youngest children to to 36% for children up to age 17 months at first vaccination.[18] In July 2015, the European Medicines Agency recommended that the vaccine be licensed for use in young children in Africa; the World Health Organization is consider the recommendation on the vaccine. In the meantime, a WHO advisory group has recommended pilot implementation of the vaccine in 3-5 sub-Saharan African countries.[19]

So we do have an approved vaccine now and efforts are ongoing to bring a better drug to market.


In 2009, the results of the largest HIV vaccine trial in history were announced. Referred to as “RV144” or “the Thai trial” (as it took place in Thailand), it had more than 16,000 participants and took six years to complete......Specifically, there were 31% fewer HIV infections in trial participants who got the prime-boost combination than among those who got a placebo. A 31% level of efficacy is not high enough to warrant use of a vaccine outside a trial setting, especially for a disease as serious as HIV.

Regarding vaccine development, a unifying theme is slow progress due to minimal or no naturally acquired immunity to HIV and malaria. Nevertheless research has given us hope. However, what I don't get is why the HIV vaccine wasn't approved if it has efficacy in the same ballpark as the malaria vaccine? Maybe a health halo effect could negate the benefits, if vaccinated people engage in riskier behavior? From what I can tell, the HIV data wasn't quite as robust as hoped, but a follow-up study in South Africa with >5000 participants is ongoing.

plans have been afoot to assess whether the results can be duplicated or improved upon in other settings...There are a number of reasons for the lengthy interlude between the trials. The company that manufactured the original AIDSVAX protein boost no longer exists, and a replacement gp120 protein vaccine—derived from HIV-1 clade C, the prevalent virus in South Africa—has had to be developed and tested in preliminary studies.


Goal 7: Ensure Environmental Sustainability [for humans and animals]
On the one hand, carbon dioxide emissions and overfishing continue to be a problem, but on the bright side there is a real push towards conservation efforts.

Sanitation and water access expanded and city life is easier, healthier and more sustainable than ever before, for example: "Since 1990, 2.1 billion people have gained access to improved sanitation, and the proportion of people practising open defecation globally has fallen almost by half." 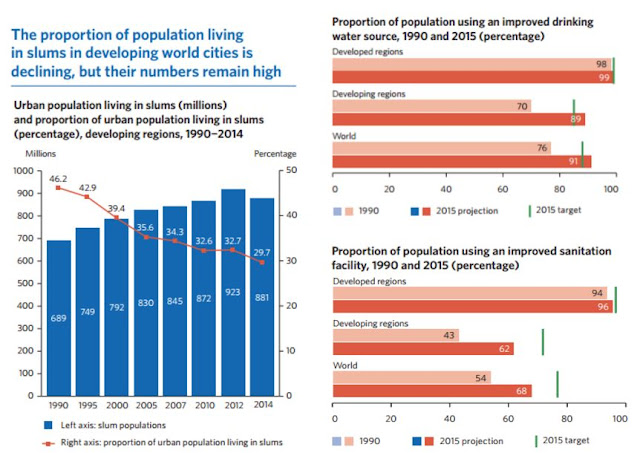 Goal 8: Develop a Global Partnership for Development [economics & IT]
Developmental assistance remains flat and a small fraction of gross national income (~0,3% on average), but there has been a shift to better support the Least Developed Countries. In addition, the "debt burden of developing countries fell dramatically over the first decade of the new millennium but has stabilized and is expected to rise".

Finally, there has been a dramatic, unprecedented uptake in communication technology. If Pinker is right, this increase in connectivity and access to information will be a pacifying force in developing countries. 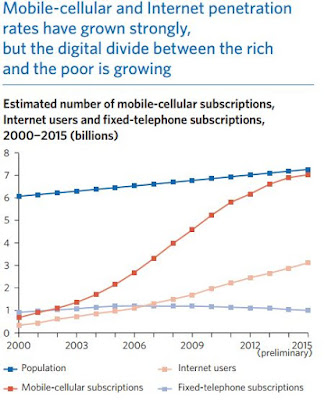