What good is the Interventions Testing Program: Rapamycin & healthy people

Februar 12, 2017
Here, I want to highlight the findings of the recent ITP cohort and ask a "political" question about the reason for running this huge mouse lifespan study and how it should influence human studies.

First a very brief review of lifespan extension in mice:

Metformin (Met, 1000 ppm or 0.1%): the ITP findings are important because the lifespan effect of metformin is surrounded by controversy, yet (foolishly?) large human studies are already under way.

Met+Rapamycin (Rapa): the lifespan increase looks big, yet barely better than rapa alone. somehow it looks like "squaring the curve" and not real slowed aging. Why? Maybe it is too selective, too limited. I get the impression that reduced mTOR signalling is just a subset of the anti-aging phenotype of CR and dwarfism. Maybe the squaring is just a fata morgana anyway, as statistically 10% survivorship is better even if single outlier max LS seems "capped". Either way, rapa or rapa+met still come out vastly superior to met alone.

Ursodeoxycholic acid (UDCA): No effect. The drug was chosen based on what seems to be relatively weak grounds. It may upregulate xenobiotic detoxification and so the idea harks back to whole Nrf2/stress resistance theory, but seems highly speculative and singular since Nrf2 is more than just xenobiotic metabolism.

NDGA: Was chosen as a "lipoxygenase inhibitor and potent antioxidant" and they keep testing it again and again but the large heterogeneity in the ITP cohort and the Spindler study is concerning. To me, the compounds is dead as it is and it will require massive efforts to reconcile the findings.

Acarbose:
Prevents the digestion and uptake of carbohydrates. It had a small effect on mean and a real effect on male max LS with a smaller one in females. Ok, I guess it's weightloss linked?

Fish oil (FO): the ITP findings are important because thre is evidence that FO could shorten lifespan, yet it is used as a dietary supplement by many people.

Protandim: Nrf2 inducer but the evidence of actual induction does not seem strong at first glance. Either way, there was a small male only increase in meanLS.

17aE2 (so called non-feminizing estrogen): Works in males but not females. God I am so not touching this stuff. Gender dimorphism is hell to work with and so are hormonal treatments in humans. On the other hand, the lifespan effect is quite large at the tail end so maybe it is worth revisiting...

Based on maxLS: 17aE2 is promising in males, protandim shows hope in both genders and Met/Rapa is the gold standard and 17aE2 is the only other drug reaching the double digits here.

Based on consistency: Protandim is promising and Met/Rapa is the gold standard.

excerpted from the paper: 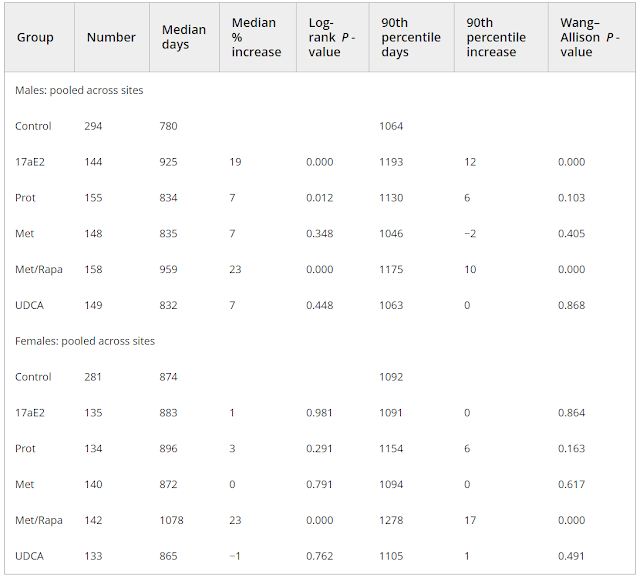 Strategic Considerations: why carry out studies if no one listens?

The almost paranoid fear of any side-effects has led to the initiation of large Metformin (Met) studies in favour of the vastly superior drug Rapa. Met is safer, it is argued. Many people, however, fail to understand that we are not playing a normal game of drug development here. Due to Täuber's paradox the potential benefits of a real anti-aging drug are a lot higher than for e.g. chemoprevention like aspirin or weak agents like metformin, which greatly shifts the risk/benefit ratio. Seriously, the effect is large, it might be easily an order of magnitude more effective for net healthspan to address aging vs disease.

The large TAME study of metformin will cost 50 million dollars but why aren't we spending even a fraction of that money on the only real anti-aging drug: rapamycin?

No one is saying to rush into a billion dollar rapamycin study, not necessarily. When I say paranoia regarding side-effects, it means that researchers literally refuse to study rapamycin in humans at all. I haven't seen any aging-related pilot studies so I think this is a good approximation of the state of the art. Quoting Kaeberlein (2):

To date, only one study has been performed assessing the impact of a rapamycin derivative on healthy aging in people. In this trial, it was observed that 6 weeks of treatment with the rapamycin derivative RAD001 (everolimus) was sufficient to enhance function of the aged immune system, as assessed by response to an influenza vaccine (Mannick et al. 2014). This recapitulates what was observed in elderly mice (Chen et al. 2009), and suggests that at least some of the mechanisms by which rapamycin delays aging in mice work similarly in humans. Although both compounds have essentially identical biological activities, RAD001 was used in this study instead of rapamycin because the study was funded by Novartis, who holds the patent rights for RAD001 (rapamycin is now off patent and sold as a generic drug).

(my understanding is there are no trials of rapa, except one with a derivative, see also below)

Some more summaries of rapa research, no evidence for reasonable human studies. Clinicaltrials-gov searches basically confirm the story that almost no one studies rapa.

Yet it would be trivial to find patients who give informed consent. Heck, you could find thousands of people who would pay you to be part of a rapamycin study. The anti-aging community is huge. Micro-dosing and intermittent dosing would be great paradigms to start...

While I am open to rapamycin criticism, I think the current underfunding of humana rapa research is untenable. Alas, fear rules this planet and fear rules research and funding decisions.