Aging across the tree of life?

Juli 20, 2017
Just read a beautiful paper and I am not disagreeing. Just criticizing their approach and conclusions to learn something for myself. So let's see. Aging is conserved in different species, right? The authors (2, 3) claim that there are big problems with this assumption and I will discuss the two articles together.

Here we contrast standardized patterns over age for 11 mammals, 12 other vertebrates, 10 invertebrates, 12 vascular plants and a green alga..Although it has been predicted that evolution should inevitably lead to increasing mortality and declining fertility with age after maturity, there is great variation among these species


More sophisticated analyses including both shape and pace have confirmed the importance of slow, negligible, and negative aging [44].One of the most striking findings in recent years is that demographic aging appears to be far from universal [3,39]
......
This finding is crucial and paradigm-shifting because it implies that there is no single, universal aging pathway. At most, there might be a pathway that is shared when aging is present but can be turned off.


Not sure I like the terminology? Talking in terms of an "aging pathway" sounds like programmed aging, which the authors themselves repudiate. There are repair pathways, we can call them "longevity" or "anti aging pathways" but if aging is largely stochastic there is no such thing as an "aging pathway" to be exact. It is true that the data collected by the authors seems to violate some evolutionary aging theories, like disposable soma but I am not totally sure how it is contradicting the standard assumption that extrinsic mortality drives intrinsic mortality? It is doubtful to me that an aging pathway can be "turned off". Instead these animals somehow manage to die before they age and I think this might be an important distinction.

My biggest concern are the many influences that can mask age-related mortality:

1. husbandry if captive population
2. extrinsic mortality esp. predation, accidents and disease
3. non-age related pathology that leads to a linear decrease in survival
4. age-related but not exclusively so e.g. cardiovascular disease

We know the true survival curves for humans, mice and rhesus monkeys by now, but in certain sub-populations and under the wrong laboratory conditions we can get survival curves that hide the true acceleration of mortality with age.

Here, I would like to give an example that suggests how these problems can easily bias survival curves. It is important to note that the authors choose the Ache population of hunter-gatherers as their reference point but the Ache survival curve is actually atypical. 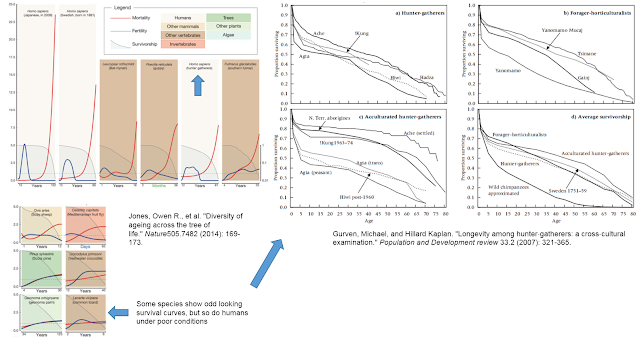 What can we learn from this paper?
There is a lot we can learn and I would especially like to remind the reader that we should be careful about the choice of species when looking for anti aging-pathways (e.g. autophagy) using the comparative approach. We can be less cautious when we study damage accumulation, e.g. mutation rate per year. Even if a species dies early or shows an odd mortality pattern, their biology must be permissive to allow them to realize their mean lifespan. Finally, it stands to reason that the types of aging damage are more conserved than the pro-longevity pathways. Let us think about the threat of aggregated proteins. A cell can cope with the problem in many ways: bulk autophagy, proteasome, selective autophagy, chaperone-mediated autophagy, exocytosis, reduced protein synthesis, proteases, aggregation-resistant proteins, aggregation-resistant cell environment, heat shock proteins to assist folding, cell death and replacement, tissue-level selection for healthy cells, and so on.

Another example: The DNA damage theory of aging is a cornerstone of biogerontology. Simply put, with time the genomic fidelity decreases and cancer develops. We can safely say that most species will show cancer-like disease given enough time, but maybe they are nonetheless cancer resistant or die before cancer gets them? That doesn't mean they don't age or don't suffer from cancer. Going from first principles it is very hard to imagine a species with stem cells that cannot develop cancer. Even just differential growth rates between cells would predispose to tissue selection effects favouring selfish replicators given enough time. Maybe here we arrive at an important distinction: almost all species age in the same way, but some aging pathologies do not develop within their natural lifetime. Rate-limiting pathologies, so to say.

Phylogenetic patterns: clustering within broad taxonomic levels of kingdom (plants, animals), or class (mammals, birds), suggests that primitive traits related to the bauplan of species may have a pivotal role in determining patterns of ageing.

This is a key point because the authors look at an extremely diverse set of species from plants over unicellular organisms. This means that we will see species- and class-specific ways of avoiding aging. The authors mention modularity and purely on theoretical grounds I find this striking. Why, of course, if you do not have many long-lived tissues, it will be easier to avoid damage accumulation. A tree or hydra has no CNS storing information permanently and because of the modularity they should be able to regulate aging by selecting the fittest stem cells to repopulate their simple, modular tissues. It is obvious that this pro-longevity mechanism won't apply well to humans but as a genetic, protein-based life form plants and hydra should suffer similar age-related molecular pathologies as we do. However, if we interpret the data correctly we can still learn quite a lot from plants.

Again: For example, it is possible that oxidative stress is one mechanism among many in species ranging from plants [70] to yeast [71] to mice [72]. However, naked mole rats (Heterocephalus glaber), which are very closely related to mice compared to plants or yeast, have extremely long lifespans despite high levels of oxidative damage [73], implying that the importance of oxidative stress as an aging mechanism can shift over relatively short evolutionary timescales.

This is only true if we consider oxidative stress a cause of aging, but that's not what we should do with the stress-damage theory: Source -> oxidative stress -> tissue damage -> failure of critical components, together with other mechanisms. Given this chain, we can have organisms with high levels of oxidative stress that live long, for instance, by repairing damage or bypassing the problem of failure (modularity) or in some other way.


For example, the finding that insulin/IGF signalling is important in yeast, nematodes, fruit flies, and mice has been interpreted as proof of the (near) universality of this aging-related signalling pathway, but this is contradicted by the absence of aging in many species nested within the clade containing these conserved pathways (hydra, some turtles, some fish, etc.).


I don't think the GH/IGF pathway has that much to do with aging by itself. It might be a mammal-specific manifestation of the disposable soma theory and fertility-lifespan trade-offs. We should rephrase it as follows. The GH/IGF pathway regulates longevity assurance mechansisms. It is the latter which are more likely to be conserved than GH-signalling and finally the damage these pathways try to mitigate is even more conserved, I would speculate. We're talking e.g. proteostasis (reduced protein synthesis and increased turnover) and stress-resistance including resistance to genotoxins.

Whether turtles use this pathway to regulate pro-longevity pathways is immaterial, but it
seems plausible, even very likely, that they use very similar mechanisms or pathways to deal with the threat of protein aggregation from a supersaturated solution.

A tongue in cheek rephrasing of this quote would be as follows: finding that smoking is highly mutagenic has been interpreted as proof of the (near) universality of this pro-carcinogenic role of smoke, but this is contradicted by the absence of cancer in many smokers.

I don't think it is that simple.

Nevertheless the authors are right and some researchers now have a rather bleak outlook on GH/IGF signalling. Perhaps it only regulates CR-like responses, which are conserved in some species and provide modest health span extension at that.


Unlike for many other biological phenomena, no single biomarker appears to have a particularly strong correlation with human age, with even telomere length only correlating at | r | < 0.5 [56]. While the complex nature of the aging phenotype does not exclude the possibility of a simpler upstream cause, our failure to identify such a universal cause to date makes its existence seem increasingly less likely.


Yes and no. The MARK-Age project has made impressive progress in identifying aging biomarkers in humans, but unfortunately a lot of the work is still unpublished. Not sure about the correlations but I was impressed when I saw the work.


Conclusion
My bet is still that aging is quite conserved, but anti-aging pathways less so. Species-specific aging and masking effects are important. Fully agree that we need to be careful choosing our models.

3. Cohen, Alan A. "Aging across the tree of life: The importance of a comparative perspective for the use of animal models in aging." Biochimica et Biophysica Acta (BBA)-Molecular Basis of Disease (2017).
Biogerontology comparative biology Evolution Life Span pathways Protein Homeostasis What should we study?