A longbet about coronavirus: is the world improving or not?

Okay, so this is how it started. This is how it usually starts. Someone on twitter said something dumb. They claimed the pandemic will continue for another 20 years. This person is not relevant in any way. They are, however, representative of millions of others, who hold similar opinions. I have talked to scientists and laypeople alike, many of them simply do not believe that the world is getting better. We will call these skeptics the "pessimists" and those who hold the opposite view the Pinkerians.

I must say I am quite sick of the pessimists. They've been wrong for the last 2000 years and yet they continue to proclaim doom every day. I will make sure that they continue to be wrong for a long time to come, and I will hold them accountable for their words. Is the world improving or not? This is one of the most important philosophical questions about the conditio humana and, in my opinion, one of the most significant political issues of this century. Without hope, there is little reason to fund science and perhaps not even any reason to live. Whereas, if we can prove that there is hope, this will in turn stabilize our political system and promote altruistic behavior.

However, if there is no hope that society will meaningfully improve in the next decades and centuries, I am willing to admit that. Indeed, a failure of certain predictions would constitute evidence against the Pinkerian worldview. Before we look at those predictions let us briefly compare the two philosophies regarding the future of humanity (4):

The Pinkerian view (which I hold):

It is pretty clear why the latter, if true, would be preferable for political messaging.
So how do we test those views? As a start, I like the idea of accountable predictions and betting. Luckily we have a platform for these things and an ongoing pandemic situation that is the perfect test case. 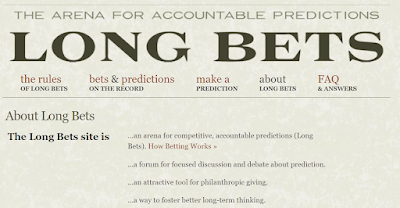 Hereby I challenge any pessimist to the following bet. The loser will have to pay 500$ to a philanthropic organization of the winner's choosing. The Methuselah Foundation is my charity of choice. In case there are no takers for this bet, this post will be reviewed in 2030, assuming this blog still exists.

The conditions of the bet are the following:

The above I would call the "strong version" of the bet and I assign it a 90% probability. The "weak version" which I assign 95% is similar except it stipulates that procedures and restrictions to promote vaccine uptake will become so commonplace, thus no one will complain about them anymore. Some form of 2G/3G or vaccine mandates will continue, nevertheless overall life expectancies will be higher again and there will be no restrictions for vaccinated people except proving they are vaccinated. In order to favor the pessimists I have submitted the strong version to longbets (3).

Explanations
Briefly, the reasons why I am confident in my prediction are as follows. The Bayesian prior favours the Pinkerian position. We are technologically advanced and we can handle this. Within two years we developed several vaccines and, as of today, we already have three treatments that appear to work when given late during the course of COVID: molnupiravir, paxlovid and fluvoxamine. Personally, I am actually surprised by how fast we developed (or repurposed) these drugs and in this case I had been myself a bit of a pessimist, who did not believe drugs will affect the pandemic; partially because I hoped vaccines will be more effective and partially because I expected drug development to take much longer.

Standard epidemiologic reasoning also favors my position. There are AFAIK no known respiratory disease pandemics that lasted more than 5 years. Eventually, everyone will get either 3+ vaccinations or several "natural" boosters through infection and all susceptible people will be either dead or protected. Of course, preferably we will protect them via vaccines before they die!

Why I think this bet should be attractive to the pessimists. The Bayesian prior favors them, so they should argue. Furthermore, I am not an infectious disease expert and I have consistently underestimated the extent and the severity of the pandemic. On the other hand, whenever I felt confident enough to publish predictions they turned out correct. Masks work, as I said already in early April of 2020. Asia will continue to outperform us was another successful prediction I made. Finally, this is not just a matter of science: we do have the tools to beat COVID back into a tiny virus-shaped hole, but whether we are politically able and willing to do so is another question.

Follow-up
Stay tuned for some "long bets" about the future of aging research. My plan is to make predictions about the next 10-15 years and publish some of them as longbet predictions/bets.

1. Source: Sterbetafeln, durchschnittliche Lebenserwartung/Durchschnittliche Lebenserwartung (Periodensterbetafel): Deutschland, Jahre, Geschlecht, Vollendetes Alter. Link.
Any values for pre-pandemic are acceptable (e.g. 2017, 2018, 2019).
Why the German census? Well, for one, I do not want to use American data because the US has consistently underperformed other developed nations in regard to life expectancy. Germany is a good representative for the European Union.

1b. You can immediately see the relevance to this blog because we, as aging researchers, work hard to increase the lifespans of the elderly (and of everyone else).

3. The guy on twitter who inspired me to write this blog mentioned that the pandemic may continue for 20 years so I am already being generous by taking a bet over a 9-year timeframe.

4b. I understand that some people like to play "five dimensional chess", me included. Perhaps they want to exaggerate the problems so that people act early to stave off such risks. However, it would make more sense, in my opinion, to say: progress is not only possible, but also likely as long as we adhere to the maxim "progress requires eternal vigilance". If you have a lot to gain and a lot to lose, will this not propel you into action?

5. Acceptable data sources include eurostat or our world in data (and their underlying datasets). The arbitrary cut-off for mortality "equal" to earlier periods is at +/- 5% for the monthly average. I like the following definition:

Excess mortality is expressed as the percentage rate of additional deaths in a month, compared to a “baseline” in a period not yet affected by the pandemic. The baseline adopted consists of the average number of deaths that occurred in each of the 12 months during the period 2016-2019. The higher the value, the higher the amount of additional deaths compared to the baseline. If the indicator is negative, it means that fewer deaths occurred in a particular month compared with the baseline period.

6. WHAT IS YOUR PREDICTION?
In Winter 2030 Germany will have overcome the COVID pandemic. Excess mortality will be below pre-pandemic levels. Life expectancy for the elderly will be higher and entry restrictions for bars and restaurants will cease.

WHY?
Briefly, the reasons why I am confident in my prediction are as follows. The Bayesian prior favours the optimist's position. We are technologically advanced and we can handle this. Within two years we developed several vaccines and, as of today, we already have three treatments that appear to work when given late during the course of COVID: molnupiravir, paxlovid and fluvoxamine. Personally, I am actually surprised by how fast we developed (or repurposed) these drugs and in this case I had been myself a bit of a pessimist, who did not believe drugs will affect the pandemic; partially because I hoped vaccines will be more effective and partially because I expected drug development to take much longer.

Standard epidemiologic reasoning also seems to favour my position. There are, as far as I can tell, no known respiratory disease pandemics that lasted more than 5 years. Eventually, everyone will get either 3+ vaccinations or several "natural" boosters through infection and all susceptible people will be either dead or protected. Of course, preferably we will protect them via vaccines before they die!