Is aging a disease?

got a cold, am bored, so I thought I will blog about a cool discussion on twitter

While to me it is strikingly obvious that aging is a disease there are valid reasons to disagree. In particular, I do like the view that sees aging as a treatable and preventable state which is the cause of age-related diseases or the view that would describe aging as a "disease-like" condition but not a disease per se. All these views have merit.

Although classifying aging as disease is very important to me it is not that important. It is not the hill I am willing to die on, you could say. Nevertheless a brief coverage of the twitter debate that was had.

What does the popular opinion say? 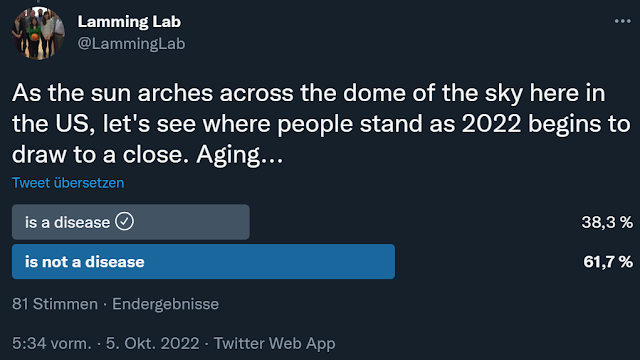 We learn several things here. The answer depends on the sample you study, and, since this is twitter, your friends and followers. We can conclude that Alex is most likely popular with young entrepreneurs, immortalists, tech bros, biohackers, etc. who are into radical lifespan extension. Dudley Lamming strikes me as a moderate and academic, so his poll might be a bit more representative for this part of the population. I am positively surprised that he is joining our side in the debate and also by the numbers in the poll. One third in favour of the disease notion, more than he expected, apparently.

It would not have been the first time to read disappointing opinion polls from aging researchers. I am reminded of a pretty shocking survey. I think it was the below one (Cohen et al 2020), but there might have been an even worse one.

Given the existence of Taeuber's paradox, these results do make me speechless. There should be 100% strong agreement on this point, at least among aging researchers. Not only is aging horrifying on visceral, personal level, no, targeting aging is also the only medically viable path forward to increase healthspan and lifespan in developed nations. Everything else is so inefficient and low impact that it is a rounding error -- except perhaps stopping the few big killers we still let loose, and the murderer we recently invited into our house, obesity, smoking and alcoholism.

Lamming alluded to other opinion polls which I could not find at a glance, although the book chapter by Janac, Clarke and Gems (2017) comes close as it has survey data (some of which is rather low quality, unfortunately, due to poor wording).

The fear of patholog-ization?
This is in my opinion one of the key reasons why we so far refused to call aging a disease.

We see quite often that people with certain conditions oppose classification of these as a disease, even though they would benefit from such a change (e.g. due to better insurance coverage), whenever they identify with their condition or fear stigmatization. Given our history with things like homosexuality caution is obviously warranted.

Many (or some?) people in the transgender community oppose defining aspects of their condition as a disease, although eventually gender dysphoria did end up in the DSM defined as a treatable condition.

Similarly, many handicapped people feel like their handicap made them appreciate life in a different way or makes them unique. Often the word dignitiy is used and sadly it is often coopted by political conservatives, but that is a story for another day. I am sure many older people will argue that aging just changed them, but did not make them worse, just made them appreciate life in a different way. However, there is no relation between these feelings and the disease question. One can suffer from a disease, e.g. acne, hairloss, aging, whatnot, and feel totally fine.

On the other hand, we should not neglect a large number of people who are actually suffering because of their handicaps and would embrace the disease label. I, for example, have suffered from chronic joint and finger pain that at some point was so bad I was thinking about quitting science. A very minor handicap compared to others, but one that I could do without, one that made no positive contribution to my life whatsoever and just made me a worse person overall.

Normal cannot be a disease state?
Charles Brenner makes this case on twitter, but I always found this argument very weak. So what if everyone has a disease?

In a society where every child starts to smoke at age 1, COPD and lung cancer will eventually reach a prevalence of 100%. Are they not diseases in this society anymore? What about atherosclerosis and cancer? We know that the underlying pathologies like fatty streaks, arterial calcification, DNA mutations in driver genes, clonally expanded precancerous cells increase exponentially, often start in childhood and reach levels of close to 100% -- arguing that if humans lived a little longer the ultimate outcome would be a cancer and CVD prevalence of close to 100%. Yet cancer and CVD are considered diseases but aging is not?

A deviation from the norm (1)
It is trivial to define a healthy person as someone in their early twenties. This would allow us to define aging or at the very least old age as a disease. It also address Brenner's claim and creates the "counterfactual" that Morgan Levine is asking for. If we distinguish the process of aging, akin to the fatty streak, from the result, which is old age, akin to atherosclerosis, we can perhaps arrive at a reasonable conclusion (which will be politically none the easier, I do not envy anyone who goes out calling old age a disease).

The issue of diagnostic criteria Levine mentions is a bit of a red herring. It is like saying what I do not see is not real. So in that sense it is actually a good point, because what we think of as disease, while guided by science, is socially constructed. I just want to change the social construction.

Objective deterioration in quality of life
This is trivially true for aging.

A subjective deterioration in quality of life
If I break my leg I can still be happy after I got my cast and I am still a human. Nonetheless it is a medical condition that objectively decreases my quality of life, just like aging. Maybe we could settle to call aging a medical condition if that makes the skeptics happy, but in reality aging is more like osteoporosis, it is both a disease and a risk factor for worse outcomes.
Here it is important to point out that a disease should decrease subjective quality of life in at least a subset of people. Since psychological responses to diseases are quite different, many, even quite severe, diseases will not decrease subjective quality of life.

Finally, Steven Austad was highlighting the similarities between aging and other processes like menopause or development (I think). However, these are not as harmful as is aging, except perhaps menopause, which, as far as I am concerned, can be called a disease. He suggested the the argument could be won by a reductio ad absurdum but never provided any. If we widen the meaning of the word "disease" enough to include aging, something bad would happen, but what? Puberty is clearly not a disease, even if mortality rates change during puberty. The mortality rates change due to aging, I'd say rather than due to what we commonly understand as puberty (sexual maturation).

Summary
I think it would be acceptable to call aging a disease. It is clear, not totally wrong scientifically and it sends a message. The construction of disease is highly arbitrary to begin with. If we as a society decide that it is a disease, then that will be it.

It might be slightly more accurate to say that aging is a slow, pervasive and harmful process, similar to atherosclerosis, that leads to a syndrome that occurs at some point during old age (or might be synonymous with old age) that then leads to death.

One commenter tweeted what I think is a nice way to end this post:

Cohen, Alan A., et al. "Lack of consensus on an aging biology paradigm? A global survey reveals an agreement to disagree, and the need for an interdisciplinary framework." Mechanisms of ageing and development 191 (2020): 111316.

(1) I believe if we had no reference to norms at all, as appealing as this is, it would lead to pretty wild conclusions, which while exciting sound rather absurd. For example, a cognitive disability may be defined via X, Y, Z and an IQ lower than a certain number, but then would an IQ of lower than 200 not also be a "pathology" since there are people who have such an IQ (or at least somewhere in the ballpark)? It is an interesting question.