Some 10 years ago Lio et al. published one of the most controversial biogerontology papers of that decade. For a long time everyone thought that caloric restriction (CR) leads to robust lifespan extension, at least in mice and rats. Yet here they found that across a panel of genetically diverse but inbred ILSXISS mice (1) CR led to lifespan shortening as often as it led to lifespan extension. Several criticisms have been levied against this study, among these are small per-group sample size, while having many groups, and only employing a single, relatively severe level of CR.

Apart from that, this paper is generally ignored and swept under the rug (6). While it has a respectable 400+ citations, the original publication showing lifespan extension from rapamycin published in Nature has over 3000, to give you an idea. Liao et al. is clearly at least as important because, if true, it would constitute a direct refutation of a multi-decade consensus in biogerontology. It would also provide substantial evidence against the external validity (translatability) of all other studies involving anti-anabolic paradigms - with CR, rapamycin and CR-mimetics being special cases of interventions that slow growth and extend lifespan.

Finally, a replication effort ("the good, the bad and the ugly")
In this new study Archana Unnikrishnan, under the lead of Arlan Richardson - certainly a veteran mouse researcher who is perhaps better known as being an NIA ITP principal investigator - set out to replicate these findings on a subset of mouse strains whose lifespans suffered the most after CR in the Liao study. Who knows why it took so long though, maybe at some point Richardson thought "we've suffered enough, someone's gotta do it" and then just did it; or maybe it took half a decade to convince reviewers lusting for citations that the validity of our research is slightly more important than another useless Nature publication that will never translate to humans. While haste makes waste, delays make one cynical.

The authors took 4 strains of both genders "reported to have the greatest decrease in lifespan when fed 40%" CR in the Liao study and subjected them to a similar CR protocol (3). The major difference is that they use around 40 animals per gender and group (low but acceptable), whereas Liao used 5, which is unconventional to say the least. (Of course the power of Liao came from using 40 strains, so in total they had 400 mice on CR and 400 on control diet.)

The results are a glimmer of hope for biogerontology. Few of the findings of Liao hold up. The effect of CR on lifespan does not replicate. The idea that maintenance of fat mass is beneficial under CR also did not replicate. Glucose tolerance improved in most strains, but did not correlate with lifespan (this was more a general prediction and not from the Liao paper. The authors were just keen to test this). Although this is nice to see I would not discount the Liao hypothesis based on scatter plots with just 8 "samples" as presented in this paper. Nevertheless the preliminary data points consistently in the opposite direction of Liao. If anything, loss of lean body mass seems to be associated with extended lifespan.

One interesting hypothesis to explain the Liao paper was that the mice might be starving under 40% CR, but when Unnikrishnan et al. tested this in one strain (115‐RI) they found that CR did produce a graded lifespan response, as we usually see in B6 mice. Personally, I am disappointed to see this, because I liked the starvation explanation . Now we are left with a much more complicated picture:

Because we were unable to replicate the effect of DR in seven out of the eight of the groups of mice that Liao et al. (2010) studied, their data should be viewed with reservation until the lifespan of the other RI lines is determined using larger numbers of mice.

A new worry that emerges from this study might be obvious if you pay attention to the table. Does it not seem like long-lived strains benefit less from CR? (5) While this makes biological sense this could be an issue for translational biogerontology, since the mean effect is already rather small and humans are 100-times longer-lived than mice (8). 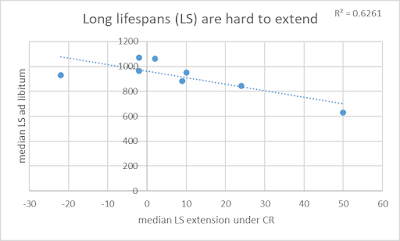 Overall it is good that the original paper does not replicate, bad as well since this screams "replication crisis" (4) and very worrying that lifespan extension is smaller in long-lived strains.

Any other positive take-home messages?
The interpretation of the data hinges on a lot of assumptions. I could just say "we don't know" and that would be correct, but I am sure people want me to speculate about the study's implications. So, if I wanted to see a silver lining, I would point out that no matter how you look at the results lifespan extension is more common than is lifespan shortening, albeit by a small margin (2). More importantly, this study selected the worst-performing mice from Liao. If these mice were genuinely the ones with the least lifespan extension, this would be an amazing result.

However, given the sample sizes in Liao it may have been a chance event that these strains showed lifespan shortening and they in fact correspond to the "median mouse". The latter interpretation would lead to a pessimistic reading of the data. Consistent with Liao et al. who had low power across each strain, but overall ran a very large study with 800 animals, both papers would converge on marginal lifespan extension benefits (upper bound would be in [2, 6]).

Other notes
Can we please get sample sizes on the Kaplan-Meier plot since there is so much white space there.

1/ I was always trying to find an issue with their approach but I really couldn't. The ILSXISS mice they use are an "eight-way cross of the inbred strains: A, AKR, BALB/c, C3H/2, C57BL, DBA/2, Is/Bi, and RIII". Some of the base strains are quite healthy and do respond to CR.

2/ Depending on whether you take the mean across the lifespan extension% of all animals or only for cohorts where the result was significant, we can see that median lifespan is 5-12% higher across the strains, whereas max LS is increased by 0-6% but keep in mind the study is somewhat underpowered for max LS.

3/ using substandard methods like unfortified chow (risking nutrient deficiency under CR) and abrupt implementation of CR, which, however, should not matter that much since they started CR in young mice at 6 weeks of age.

4/ It is not clear if this is a real replication problem or a matter of "optics". In fact, Liao should be applauded for taking a risk here. Even if we do not expect the individual strain datapoints to replicate, given how variable mouse physiology is, their overall study design with the pooled data still seems sound. The question is do we really not expect the individual strain parameters to replicate? Do we expect CR effects to be much more variable than mean/median lifespan across strains? The median LS replicates well across both studies with an R² = 0.71 whereas the CR effect has an R² = 0.04.

5/ this effect, reduced lifespan extension ing long-lived mice, is plausible and expected but I have NEVER seen this documented for CR. The same is true in the whole Liao dataset with an R² = 0.23

6/ While not everyone ignores the paper, it still took us a decade to try and replicate it. I like the way Swindell put it (2012):

"It seems difficult to understate the potential importance of these findings to our broader understanding of DR and its impacts on aging in the laboratory mouse. In prior decades (1934–present), effects of DR on lifespan had been evaluated in 27 unique genotypes (Supplemental Table 2). In combination, the studies of Liao et al. (2010a) and Rikke et al. (2010) have evaluated 54 new genotypes, thus tripling the number of genotypes for which the effects of DR on mouse lifespan have been examined. Among previous experiments (1934–present), DR increased median and maximum lifespan in mice by 15% and 18% on average, respectively (Table 1). However, if these average effects are re-calculated with inclusion of the ILSXISS results, the average increase in median lifespan with DR is only 2.9% (2.9% in males; 2.0% in females; n = 189 experiments; Table 2), while the average increase in maximum lifespan with DR is just 5.2% (3.7% in males; 5.0% in females; n = 181 experiments; Table 2)."

8/ why could this be a non-issue? Within-species and between-species scaling of effects is not the same.