Revamping biogerontology for a new decade

Biogerontology must engage with science-fiction
Physicists have a long and productive tradition of engaging with pseudoscience, futurism and science-fiction (2). Some of them talk about wormholes and faster than light travel (3), what is possible and what is impossible, and how we can get closer to these dreams. Others, like NASA, talk about the Science of Star Trek (1). In fact, every single pop-sci book about physics I read in my childhood talked about space ships going to the stars and time travel. Who was not inspired by science fiction when they were young! Why can't we do the same? Where are the children's books talking about a 300-year-old woman getting a new, young kidney; where are the youtube videos about biological immortality?

Humans have dreamed about eternal youth and interstellar travel for centuries. Although no one laughs when NASA talks about the concepts behind future interstellar travel, even if this is centuries in the future, when we talk about extremely long lifespans and discuss concepts of maintaining youth forever, we are denigrated as dreamers, crackpots or we're politically "damaging the cause" (8).

But you better believe that biogerontologists are the ones well equipped to talk about immortality and rejuvenation in all shapes and forms.

One thing that I wanted to make clear, but perhaps failed to convey in my last blog post, was that we have to inspire people if we want a new generation of scientists to thrive. Science exists to make our dreams come true: the dream of a better, longer, healthier life. The dream of understanding, taking pride and stock in this fleeting world. The aspiration to live as long as we want - which is equivalent to "[biological] immortality". If we never talk about these dreams and outline potential paths to realize some of them, science will whither, because passionate activists and researchers will go elsewhere.

Do NOT overpromise, but let's be honest about our ultimate goals and let us weigh in with our expertise. Many of us, if not most, carry these dreams in their hearts.

Biogerontology must engage with the arts
Recently I stumbled upon a Steven Weinberg obituary and immediately thought to myself if we could modify his famous quote as follows:

The effort to understand and stop aging is one of the very few things that lifts human life a little above the level of farce, and gives it some of the grace of tragedy. This is the effort to allow people a choice: life or death, when and how long.

Thinking about this a little more, I started to wonder: why do we have so many famous writers talking about particle physics and cosmology out of all things in the world? Why is there beautiful prose written about black holes, stars, time travel and all topics even farther away than radical lifespan extension, but so little on topics closer to everyday life? (5) Oh, and besides, Steven Weinberg is dead. He died on July the 23rd of 2021. Aging claims so many great minds. Do you really want great, productive scientists and artists to die? Wouldn't it be horrible towards the deceased's family to claim that death and aging is okay and just a natural part of life?

Biogerontology must engage with pop culture
I am not an artist so I can't be the catalyst for this kind of change. However, I can help a bit with another issue. Do you know why the grassroots movement to slow climate change, fight pollution, promote veg*anism and reduce ecological damage is thriving? (6) It is successful not only because it is appealing to young people on a visceral level ("it is our future that you are stealing"). It is because the movement is able to express its dreams in a way that is appealing to young people; through pop culture: cynical, satirical, entertaining, artistic, bitter, pithy or light-hearted.

The difference is day and night. Just google "aging memes", these are hot garbage, and compare them to the amazing "climate change memes" you will find online. We are complete buffoons when it comes to advertising and selling our own brand. Almost every modern aging researcher knows we are right, but how do we convince others? Part of the strategy is having young people move the overtone window. The process will not always be clean, tidy and truthful - that is a fact of life when laypeople communicate in pithy punchlines - but, overall, it will be effective and it will eventually help science (7). 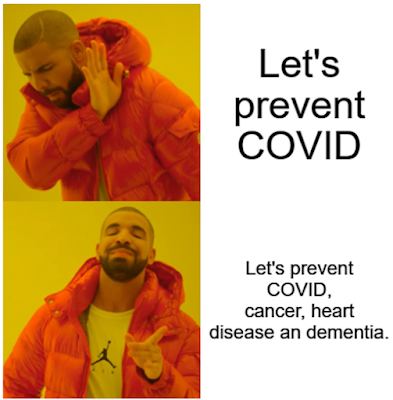 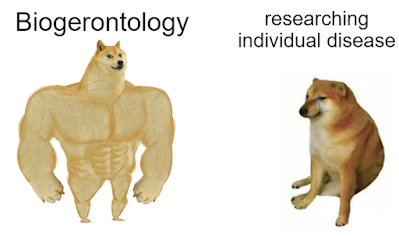 We are young and we are coming to upend your world
Biogerontology and science in general has been the domain of old white men for way too long. We the scientists failed to change that. While I have no problem tapping the wisdom of venerable professors, I do think we need fresh faces, new ideas, radical changes; we need inspiring communication, we need art, memes, we need exaggerations, jokes and most of all we need the truth; we need a healthy mix of different strategies. I know it is scary, but don't fear us, because we are on your side. Let us consult John Lenon for a closing remark. He would be an old man now, yet he would agree with us:

You may say I'm a dreamer

But I'm not the only one

I hope someday you'll join us

And the world will be as one

A world where we can openly say that we are trying to defeat aging and then see how far we go. A world where dreams are not dismissed out of hand, but instead are used as inspiration to craft long-term plans and goals.

2. And biologists talk about free will, metaphysics and religion all the time, also not their field per se!

4. Not getting too much into details. There are of course many theories. Cognitive dissonance is one. As I suggested in my post, if we people admitted that death is pointless, they fear death or at the very least do not want to die, then they would have to face certain hard truths about the world - and they cannot handle this. People will rather invent reasons why death and aging is useful.

5. The smallest of steps towards immortality would produce unprecedented increases in human healthspan due to a phenomenon known as Taeuber's paradox.

5b. That may be changing slowly with people like Aubrey de Grey or, more recently, David Sinclair reach "pop star" or "cult" status.

6. Let us not get into the endless debate about consumer vs government responsibility. Yes, I do agree that political change has a better leverage than going for changes in consumer behavior - and that thus many veg*an activists may not be acting as perfectly effective altruists. Regardless, the anti-climate change movement is fucking quite successful.

7. While climate change activists are not always truthful, they are definitely more reasonable than climate change deniers and, I believe, having a positive impact on the discourse.

8. You may have your preferred strategy and consider us naive. That is your right. However, what I do not get is, people wasting time, energy and political capital in order to attack their allies. We have a common enemy: diseases, suffering, science denialism, frauds. Let's focus on that.