April and May events and news - VitaDAO, ARDD22, Singapore and more

This is my personal selection of events of interest to professional biogerontologists and those who are following the science of aging. Do let me know if there are any additions to be made. 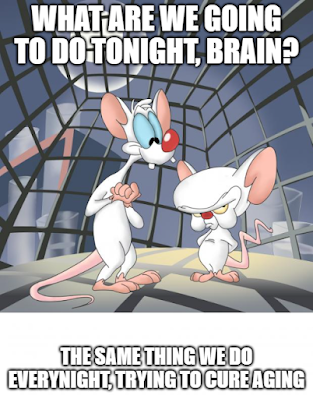 I (the @Aging_Scientist on twitter) will summarize a couple of the talks from the VitaDAO symposium, although fewer than I aimed for, because it took way too long to write these as is. And as always I will provide my comments on the state of the art. All errors are mine.

Prof. Marco Demaria - University of Groningen
Heterogeneity in Senescence: from Mechanisms to Interventions
The goal is to delay multiple diseases by targeting aging. Telomeres shorten with time and cells grown in culture reach the Hayflick limit, similar things happen in vivo. We see activation of p53 and p16 expression leading to a stable generally irreversible state that is called senescence. Not all senescence (sen) is bad, because it is of course also a tumor suppressor mechanism. The factors secreted by senescent cells (SASP), are growth stimulatory, angiogenic, pro-inflammatory. This is also called sterile inflammation, which is inflammation when no pathogen is present.

We see more p16 staining in aging skin and colon, while in the brain, for example, we see elevations of GATA4 and p16.

Then Demaria talks about the, by now, classic p16 reporter mouse model where p16 was tagged with an RFP, luciferase and HSV-Tk cassette. This allows to visualize senescent cells by FACS sorting via the RFP protein, through visible light by luminescence and destroying them by ganciclovir treatment (GCV). 6 months of GCV treatment improves running distance and grip strength in mice.

Senescent cells accumulate in most tissues and they are at the center of several aging mechanisms. Treatments can be senolytics vs senomorphic, i.e. either kill the cells or reduce their harmful SASP secretion. Many drugs exist but senescent cells are heterogeneous e.g. dependent on the tissue of origin, stress type etc. so not all drugs will be universal.

Using an overlapping transcript signature from the different sen models, his team tried to predict drugs that hit all of the pathways (the candidates are proprietary). One of them administered in 3x 3-week cycles decreased luminescence expression and improved grip strength.

Senescent cell accumulation is also seen in the cochlea of aging mice and ablation leads to amelioration of hearing loss.

If high oxygen partial pressure promotes sen, can hypoxia interfere with sen? 20% oxygen is the standard cell culturing protocol whereas in the body cells are exposed to between 1 and 9% O2, with a mean of around 5%. Thus for his experiments 1% was considered hypoxia and 5% normoxia.

At 1% vs 5% although cells do enter sen they do not produce the SASP, and this effect is mediated via mTOR. Roxadustat, an EPO inducer, also reduces the SASP but the effect looks more modest to me than the effect of hypoxia. In mice the drug inhibited mTOR and increased grip strength.

During the discussion Demaria mentions that luminescence only shows senescent cells near the body surface, and their abundance is estimated at 3-5% by RFP FACS sorting. In fat it can be higher. Human sen in blood is hard to measure, usually only really feasible via biopsy or in autopsy study. As of now it seems the number of sen cells in a tissue cannot be predicted based on the characteristics of the tissue and its physiology.

Ideally one would like to copy the oxygenation levels of the original tissues when doing experiments but this is expensive to do. Other issues in experiments are too much glucose and 1D culture.

Finally, we should keep in mind there are beneficial components of SASP, while NFKB-driven targets may be bad, others may promote immune surveillance or tissue repair and we do not want to mess this up chronically. In vitro early SASP is the good one, late one is bad, but this seems like an over-simplification.